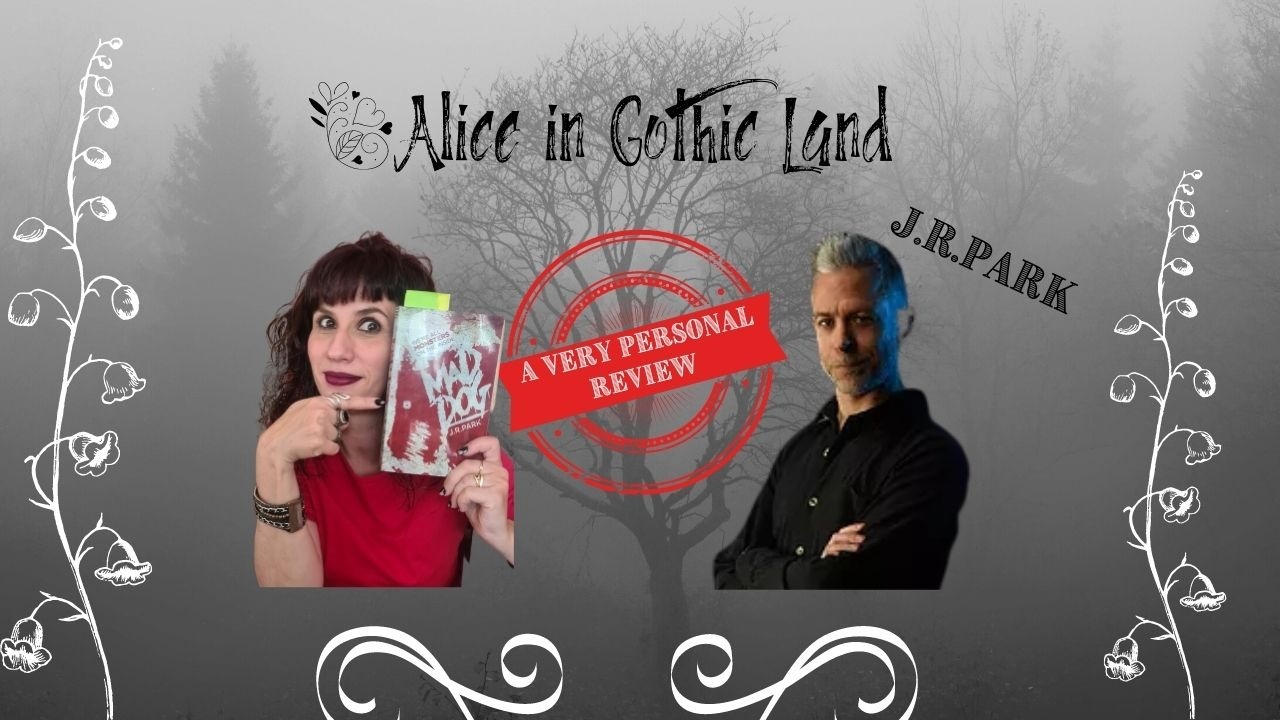 In my quest to define the monster during this month of May, I bring you today a very personal review of Mad Dog by J.R. Park.

Last week we talked about some of the monsters that appear in Church Curiosities - Strange Objects and Bizarre Legends by David Castleton, by which we got a lot of the folklore around Vampires, Imps, Giants and Witches that can be found around Churches and Churchyards.

Today I’m bringing you something very different and that actually portraits very well two types of monsters: the psychological monster and the physical monster and how they can actually blend.

When reading Mad Dog you may have the sensation of going back in time and it will be right if you do so, because one of the main inspirations for this book was Michael Jackson’s werewolf transformation in Thriller. In our interview together with Tracy Fahey, Park said that it was with that scene of Michael turning into the beast that he transitioned from loving dinosaurs to becoming a Horror fan.

Today I want to bring you a more in-depth analysis of Mad Dog so you can learn all the benefits you can obtain by reading it. In order to do so, I’m going to structure this review in sections, starting from the general idea to the specific one. In this sense I will begin with the cover, then the book layout and structure, the plot, characters, language and expression, and finally I will tell you why I think you should read this book.

So, let’s start with the first thing we see which is the cover.

I have to recognise I am turning into a bit of a book cover fetishist and not necessarily because I’m a visual learner, which I’m not, but rather because I am a kinaesthetic person and therefore looking and touching the cover contributes to the reading experience. In this sense, I love how the wolf is splashed in red, impersonating the blood not only because of its colour but also in the way it spreads and runs all over the cover. The other tone that we see in the background is the greyish pavement colour that reminds us of the pigments of the concrete in buildings, i.e. prisons, where there’s dirt, blood and other bodily aspects. We can see the moon at the top and the phrase across it ‘We’re all monsters on the inside’, which is key for the development of the story. In the middle of the book we get the title and the writer’s name, and at the back, as always, the blurb of the book with the quote by the character Father Matthews: ‘You don’t need my expert opinion of the esoteric to know there was something very, very wrong with him’.

One of the reasons I wanted to talk about the cover is because this is the same image we come across inside in black and white and that serves as a divider for the chapters, a lay out that reminds me of the books I used to read as a child. As we can see, Park takes a lot of care when it comes down to covers. Nothing is random with him.

As per the external structure, the book is divided into 21 chapters and a final section called “Contributors”, which makes the story more realistic. You can also read blurbs from Park’s other works after that, and as I mentioned before each chapter is divided by the image of the cover in black and white.

As per the internal structure we have a book written through testimonies and witnesses and therefore following a modern version of the Gothic tradition of Diary or epistolary novels such as we have in Dracula or Frankenstein. This gives us the chance to find out the opinions of the different characters, which allows us to know about all the little personal dramas and substories that they all carry with them and that we will try to use to figure out all the pieces. When reading Mad Dog, you feel like if you were Hansel and Gretel following the crumbs that Little Red Riding Hood has left behind in order for you to finally discover more about the big werewolf. You can imagine that there’s going to be a surprise somewhere.

This layout also brings us different interpretations of the main story and the monster’s identity which spice things up a little bit more. We learn that reality doesn’t look the same for everybody and that we are all pieces of a world that sometimes escapes our understanding, scientific explanations or the workings of our minds.

The multiplicity of voices in Mad Dog gives us also multiplicity of angles and stories within the story in some sort of Matrioska’s doll. On the one hand we have the main story that goes around our main monster and main character Mad Dog Mooney, from which everybody talks about, knows about and fears, but nobody has any idea of what to make of him. There’s an uncertainty about him too. You are never too sure of what you are looking at: a real supernatural animal or a crazy human being, and this blurring of boundaries is for me one of the strong points of the story. As a reader you are constantly expecting an explanation, but that explanation never happens because I think this is part of Park’s evil plan to keep us reading. The other stories that run parallel to the main one, are connected to the internal dynamics of the prison and the people who are there, whose aggressive behaviours blend in with that of the Supernatural Monster. One of those stories, and probably the most important one is the planning of the jail break that takes part during a full moon.

During the development of the stories and the substories we start to see how much of the “we’re all monsters on the inside” starts becoming evident. At this point we are confronted with this idea of how much monstrosity is programmed in us as humans put in extreme situations and having a certain genetic predisposition to crime, and how much is there of the supernatural that can actually escape any type of coherent explanation. In this sense I love how Park brings realism to the paranormal setting using science to play with the reader’s train of thought. We can see this when he says things like: ‘Despite popular beliefs that the full moon influences our moods, none of these studies have been able to satisfactorily demonstrate the existence of a so called “lunar effect”’ or with the quote ‘In 1978 the Journal of Clinical Psychiatry published the results of data analysed to determine whether a relationship exists between the lunar synodic cycle and human aggression’.

Apart from convicts, murderers and the jail staff, I really love that we have a psychologist and a priest in the crew, who try to find “the cures” of the mind and soul, but also bring with them their humanity and personal problems. Once again, this can remind Dracula lovers of the characters of Van Helsing as the guy with the supernatural solution and the psychiatrist John Seward as the expert trying to get into the Monster’s mind.

It’s also important to say how the weight of fairy tales and legends can have an impact on people up to the point that even a “ghost story” like Peter Ball, one of the characters, says is a ‘legend that spooked even the most hardened of criminals’.

Since there are people telling us about their experiences and thoughts, we have colloquialisms, jargon and some swear words, but they are not overwhelming. If you are not into swear words, the descriptions will compensate. They are rich precisely to create this sensation of disgust mainly in the moments of physical evisceration. If you are a learner of English as a Second Language and are trying to improve your knowledge on body parts and all the horrible things that can happen to them, this is the book for you. If you would like to have some tips on how to increase your vocabulary while reading or watching your favourite scary films or TV programs, I have the right free download for you as a starting point. But if you are too lazy to put this together yourself you can also purchase My Favourite Series Notebook PDF, an 81 page downloadable notebook that will help you make the most of your language learning while watching your favourite films and series.

Why you should read it

I recommend you read this book if:

To convince you further, here I leave you with some phrases that will stick in your head:

After all this analysis I would like to ask you the question. What is the kind of monster you enjoy reading about? Let me know in the comments and don’t forget to check out my free materials for you to keep working on your critical thinking and language and communication skills.

If you have enjoyed this content and found it useful don’t forget to subscribe to my blog for more weekly educative articles.

Buy this book now by clicking on my affiliate link