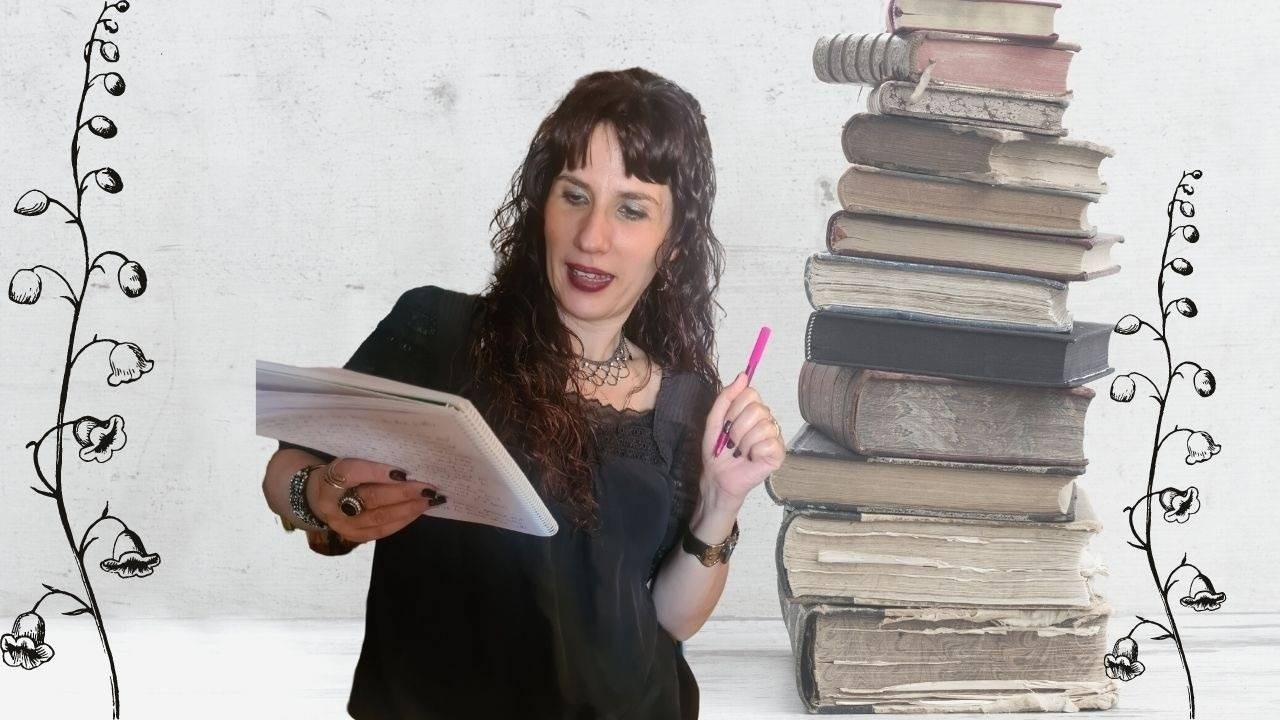 Everybody has at least one book inside of them. What is yours? Have you ever thought of writing it out? Would you even know where to start? Would you like to find out how to get on with it once and for all?

I’m sure that many of you have been meaning to write a book for a long time and never seem to get round it. I don’t blame you. Even the thought of trying to figure out all the steps can be overwhelming.

Today I’m going to share with you the main steps that have finally helped me start writing my book (that as you can imagine will be packed with my favourite Gothic elements), so they might be of use for your own writing journey.

Since the 20th of April I’ve taken seriously the task of writing my first book so I’m doing something about it on a daily basis. A friend of mine and also writer J.L. Forrest said to me once: If you write a little bit every day at the end of the year you will have a book. If you don’t write, well, you know what you will get if you don’t write.

Today I’m going to give you 6 steps that can help you get the right mindset to start writing your book consistently regularly non-stop until you’ve done. But before I do, I will give you some background information about my writing journey so far.

I’ve been writing articles and short stories in my blog more or less regularly since 2018, which if you think about it is something that is not hugely challenging because I’m still in my comfort zone.

But the reality is that I have been writing since I was 8 when I got a little diary as a confirmation present. But writing for so many years doesn’t mean that I mastered the trade from the very beginning. On the contrary; I never stood out from the crowd in school or college but I would every so often create a piece that would surprise my teachers. In college I never won prices for my short stories contexts but I got my friends hooked to my little mini- series of Gothic drama. And at University a bit more of the same.

During all that time I knew I had a lot to keep working on, I wasn’t an avid reader but, when I read I really chewed every page, and made sure I read those books that really had something for me. At University it was a different matter, but having to read variety of books allowed me to do great discoveries.

The writing call has always been there, but also the fear of failure and criticism. Not to mention what imposter syndrome does to you. All these becomes enhanced by the fact that I write in my third language. As you can see the challenge is on the table.

So after all this life full of writing and 0 selling production what has finally giving me the push?

The first thing I needed before wasting my time and others was some kind of reassurance from published writers and professionals in the field. I did this by showing my writings to them, having their feedback, encouragement and support. Having others who are already there genuinely stroking your ego is the first step. Basically you are asking them if your stuff is interesting. You can also use your family and friends but they will try to be ever so nice to you and will not necessarily give you their most honest opinion.

2. Interview writers and find out about their writing habits

This is a good tip to do regularly before, during and after you’ve written your book because it encourages you to reaffirm things you already do, and learn from others. It is also good to learn new habits that may work for you that you’ve never heard of and to set your mind to rest a little bit. Sometimes it is good to see how cool other people’s rituals are and use them yourself.

3. Talking to an editor and publisher

Kidnapping (obviously not literally) Tracy’s publisher, J.R. Park, and asking for his honest opinion before jumping into it, has been what has triggered the following steps.

The thought of sending my work to an editorial or publishing company that doesn’t really know anything about me, made me really nervous and insecure. For a long time I had clear that I wanted to find a home for my work that fitted the profile for them but where I felt I belong.

After a bit more than a year following different editors and companies, J.R. Park from Sinister Horror Company ticked all the boxes.

I was lucky to have Tracy encouraging me to contact Justin and after having interviewed them both to talk about the process of writing and publishing, I felt I had found the perfect fit for me.

This is how the “Creation of a Fiction Magazine” was born and this was the starting point of further conversations with Justin.

The phrase that has given me the final kick and some kind of psychological deadline and pressure to keep working on my book was: Write your book first and then we’ll talk, which means that at least I know that whatever it is that I produce will have the right feedback.

I spend most of my time writing, in fact I think I probably write too much. But at the end of the day, it’s all practice and I always end up recycling what I write into posts, stories and sessions. So creating a journal where I write flash thoughts and ideas, research, little drawings, dreams, conversations with friends connected to my story, etc… was a logical step. All this helps me keep checking my own train of thought when I am actually writing the story. Every day I pick up from where I left the day before and I add to it.

5. Keep an eye on what’s relevant for your story

Research everything you feel you are not too sure about. However, this can take you to feel overwhelmed, confused and you may feel tempted to procrastinate. By keeping the journal I find it easier to visualise where I’m going, if I’m moving away from the initial idea, or if there are recurrent thoughts I need to keep researching.

Everything that you feel will complicate things, put it towards one side for now. Some things may not seem that they are working out right now but they may be handy later.

A lot of your research might not be relevant but you may want to use it for your next book. Imagination doesn’t stop you writing the book you want to create now and it may produce other books. This is something that happens to some writers.

6. Book time for yourself in your writing sanctuary

My main enemy is time. I’m always working against the clock, so I have decided to read the signs. I love writing my book when it is already dark because I know it’s the end of the day and I don’t have to worry about preparing classes until the following day (I’m going to struggle with this in the summer).

I choose the music that goes well for what I’m writing at the moment. That helps me concentrate, triggers ideas and phrases. I close the door of my office and then I write, research or do a bit of both. Sometimes I have an hour, other times less, but the important thing is to feel you are moving on. In occasions you have an idea lingering in your head and the following day when you pick up your writing again you see the solution you didn’t see the day before.

These are the most important steps that have helped me get on with my book on a regular basis, but I’m sure they are not the only steps you can take. We are all different and therefore different things will trigger the action button in your head. But I hope this helps for today.

If you want to know more about my writing journey, are interested in what I’m writing about or would like me to create more videos on the process of writing let me know, I would love to hear from you.